New York is known for many things, but surfing is not one of them. yet there are a few hardy souls who brave the traffic and weather conditions here, and wouldn’t have it any other way.

A little under five years ago, British expat and writer Ed Thompson met French photographer and fellow surfer Julien Roubinet on Rockaway Beach in Queens, New York. In the water was a small cluster of die-hards who’d found a way to chase the beautiful moments of surfing, even if they had to cram onto a crowded subway car and battle choppy, inconsistent waves to do it.

The result of that meeting is their new book, Ice Cream Headaches (Damiani), in which Thompson and Roubinet chronicle the brave souls who ride the sandy, barrelling breaks around New York City, even in the chilly depths of winter.

“In California, surfing is almost ordinary,” says Thompson. “On this side of the country, you have to work a bit harder. It doesn’t just come to you—but that makes it more special when you do get good waves. And it means that surfing here attracts a certain type of character.”

These characters might hail from the Rockaways, Montauk or south along the Jersey Shore to places like Manasquan. In researching the book, Thompson and Roubinet travelled more than 4,000 miles, meeting people like Mikey DeTemple, a Long Island surf filmmaker and free surfer known for his traditional-style longboarding, and Sean Brewer, a surfboard glasser in Belmar, New Jersey. “People like that have really stood up,” says Thompson. “They’ve had to work really hard to build their lives around the ocean.”

Thompson also met people like William Finnegan, a longtime staff writer at The New Yorker, whose surfing memoir, Barbarian Days, earned him a Pulitzer Prize; and Chris Gentile, an artist who also runs Brooklyn’s hippest surf shop. “At various stages, both of those guys actually hid their passion for surfing,” says Thompson. “When Chris was at art school, he’d hide his boards behind stacks of canvases. And William thought people would take him less seriously as a journalist.”

But, as Thompson says, “When there’s a good swell, all types of people come out of the woodwork”—including corporate types. “I have a friend who works for IBM, who will sit in his campervan by the beach, writing emails and waiting for the wind to turn offshore. In the summer, you get guys leaving their Wall Street desks at 5 p.m. They ditch the suit and dash to the beach in time for a sunset session.”

East Coast surfing is also notably friendly, says Thompson. “We’ve spoken to a lot of guys who surf in California as well, and they say it’s so much friendlier on this side of the country. People will talk to you in the water—about all kinds of things, not just surfing—and they’ll whoop and cheer when you get a good wave.”

And that spirit, ultimately, is what unites people here. “That rush of riding a wave is universal,” says Thompson. “But if you do that surrounded by interesting people who’ve really worked for it, it only feels better.”
icecreamheadaches.nyc 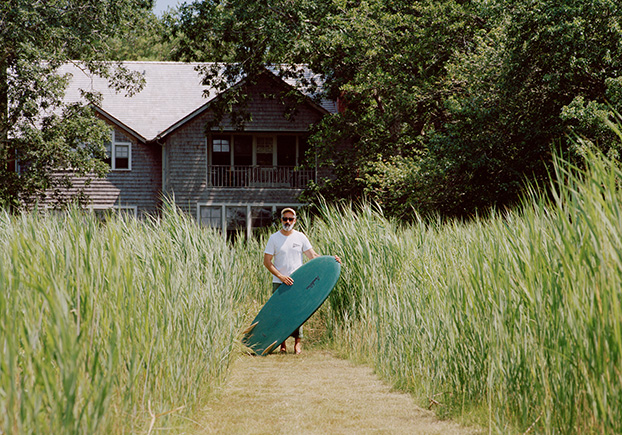 Like many of the people featured in Ice Cream Headaches, Gentile does a whole lot more than surf. He’s a respected photographer and installation artist who has had solo shows in New York, and was once the creative director at Condé Nast’s photography studio. In 2012, he opened Pilgrim Surf + Supply, a beautifully curated Williamsburg shop specializing in surfboards by small-scale makers from around the world. He has since opened branches in Amagansett on Long Island and in Tokyo.

“I want to celebrate the backyard innovators who are obsessed with crafting surfboards,” Gentile says of master shapers like Marc Andreini, Gary Hanel and Steve Pendarvis. “For them, it’s like folk art, with knowledge passed down. These are heirloom surfboards.”

If Gentile has to be in the city for his work, Long Island is often quietly calling. “When the surf is good, you can go, but it’s not like having Kirra or Malibu in your backyard. It’s work to get to the surf, and I think that’s a good thing. But when I’m out in the water, it’s like meditation. You spend 99 percent of the time just waiting. It gives you time to really think, and to make sense of things—even if it’s just getting a Whitney Houston song out of your head.”
pilgrimsurfsupply.com 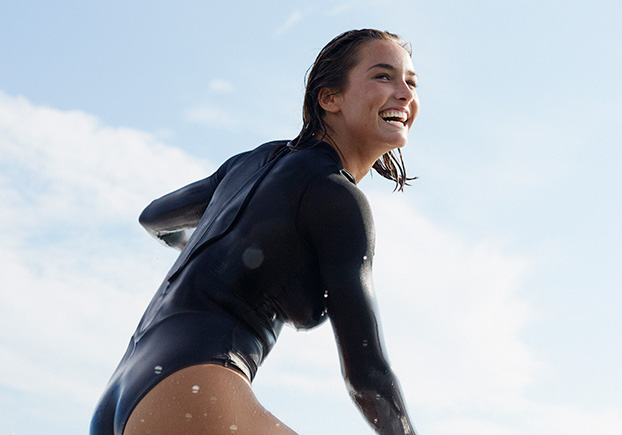 Peterson was put on a board at age 2, and grew up riding waves in Wildwood at the southern tip of New Jersey. With encouragement from supportive parents (her dad  loves to surf and fish), she’s been traveling to surfing competitions since age 12, homeschooling on the road. As a teen she competed in the World Surf League Junior Qualifying Series,  eventually ranking second in the U.S., and sees her Northeast roots as an advantage. “I beat the odds growing up on ankle-high waves instead of perfect point breaks, so that’s a part of the surfer I am today. There aren’t many people who come out of New Jersey and make it on the world stage. That makes me want it even more.”

Now 20, Peterson already has the fans and mentors to support a path to success, and is an athlete ambassador for Lululemon and Kopari Beauty products. But, even with all this in place, she’s realistic about her chances. “Making it in the surf industry doesn’t scare me. I know I’m more than capable of it, but I want to have something of my own to come back to. At some point I want to pursue a degree. Surfing won’t always be there, but school will, so that can wait for now.”

It turns out the waves will have to wait, too, at least for a few months. The recently married Peterson just had a baby boy and is eager to get him on a board. “Surfing has become such a big part of my life. The beautiful moments I’ve had on the water—sharing those moments with our son will be special to both [my husband] Blake and me.” 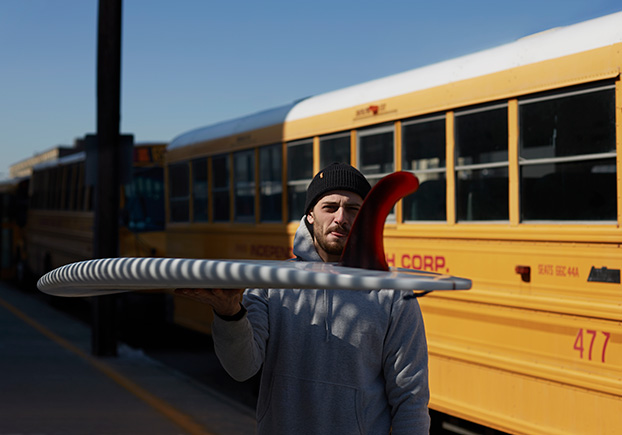 Falcone’s connection with New York surfing runs deep. Growing up in the Rockaways, Queens, just south of JFK Airport, he started surfing at age 9, while also immersing himself in skateboarding and graffiti. At 17, inspired by legendary Rockaways surfboard shaper Dennis Farrell, he built a makeshift shaping studio in the garage of the family home. “I had to drain the savings account and make a kind of business pitch to my mom,” says Falcone, more widely known as “Joey Clams.”

Now approaching 30, and almost a thousand boards later, he’s still in the garage, a space he dubs “The Clams Casino,” with the family dog as a security guard. While surfboard shaping “just about pays for itself,” he also works at surf shops, including Chris Gentile’s Pilgrim Surf + Supply in Williamsburg, where he mans the floor.

Falcone says that the relative lack of waves here, compared to Hawaii or California, means he has more time to think about his designs, such as his signature Keel Fish shape, with its split tail, which he tailored to the Rockaways’ often choppy breaks. “It’s a big investment, and I’ve made peace with the fact that it’s pretty impossible to make a living doing this,” he says. “I do it for the love.”
falconesurfboards.com

For more surfing/beach news and products, visit King Of The Beach website!